I admit it. I have a thing when it comes to computer bags and wallets. So I am so happy when I can finally find one that meets the needs I have and temporarily set aside looking for new ones. For some unknown reason I am hard on wallets. They seem to typical last me only 4-6 months at best before they are falling apart. For a while now I have been trying reduce some of the friction in my life my minimizing some of my belongings. Whether that is a wallet, software on my Mac or iPhone or possessions I own. I would not say I am totally minimal but I do value a few nice pieces more than a ton of clutter.

A few years ago I bought some no name leather wallet off of eBay and was amazed how well it lasted. I might have gotten 4 years out of it before I had to go back on the hunt for a new one. Of course I was not able to get a duplicate of my previous one. When I purchased that wallet from eBay the one thing that struck me was that the credit card slots were vertical rather than the traditional horizontal. It made the wallet feel smaller and more compact. Ever since then this has been a primary requirement when looking at replacements.

My girlfriend is constantly teasing me about my collection of “carry-things”. I have spent nights looking through lists of wallets as well ask reading blog posts about them as well. For example I was very intrigued by the Dosh wallet and was going to buy one and see if it would work for me. Luckily Ben Brooks’s review of the product saved me a few dollars.

My first foray into post perfect wallet brought me to a Tumi Alpha Accessories Multii-Window Card Case.cThis is again a smaller wallet, measuring 3“W x 4 1/2”H. The exterior was a woven mesh fabric, similar to a carbon fiber but was ballistic nylon trimmed in leather. The interior leather seemed to be very high quality. 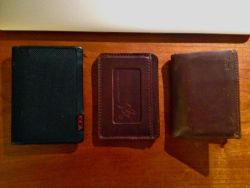 One of the things I initially liked about the wallet was the two quick Id pockets. Both clear and with a void in the center to slide your thumb there to push the card out. I used one for my drivers license and the interior one for my ATM card. Above the interior Id card holder was another slot for a credit card. Beneath those was a side loading slot that could easily handle several additional cards. On the right side were 3 card slots and another slide pocket similar to the one on the left. There is no traditional slit to hold your bills so you had to fold your money and slip it into one of the side slots. This did not pose a problem unless you were carrying a lot of bills.

I used this wallet for about 4 months prior to starting the process all over again. As the wallet broke in the cards on the inside pockets shifted and caused a bulge on the exterior that I did not like both visibly and when it came to sitting on it in my back pocket. As a result when you closed the wallet the two sides were longer meeting. I also discovered that the visual ID card slots were not ideal. Over time the cards would begin to “stick” to the clear plastic preventing them from easily sliding out as expected. More than one time I had to pull out of the ATM line because of the cars behind me were lining up and I was not able to get access to my card quickly enough. The wallet was able to carry quite a few card in it as well which is a blessing and a curse as I have been trying to minimize my wallet items. Perhaps some of the shape deformity was of my own use. I still have the wallet but overall I was a little disappointed overall that it did not last longer.

My next attempt was with the Saddleback ID Wallet.cThis case uses the traditional horizontal card slots but since it was no a bi-fold I would give it a shot. This looked to be ideal for a front pocket wallet - or a small rear pocket wallet. The leather was an extremely durable pigskin and the quality was exceptional. The dimensions for this wallet were 4 1/8“W x 2 7/8”H x 3/16” D. This wallet does not fold but does have slots on both sides. There are 3 card slots, an Id slot without plastic and pouch in the middle which could hold additional cards or cash or receipts. I took the items out of my Tumi and put them directly in the the Id wallet. Due to size limitations I could not fit everything. From the videos on the site1. and on Youtube it is clear that it will break in over time to allow for more. I took out things I thought I did not need and carried this for a couple of weeks. Very slowly it began to break in but I found during this period I was carrying a money clip with the extra cards I needed. This was more my issue than the wallet but it

Still created that additional friction. This wallet I think is geared more for cards than cash. While you certainly can keep a few bills in the center pouch it did create a bulge in the exterior if I stuffed it - small bills will not be your friend in this case. One of the things I did start to think about was as I added cards and the wallet took shape would removing a card then in the future cause all the remaining ones to be loose and fall out? I am not giving up on this wallet, I do like the aesthetics and design but this will be more of a weekend carry until I can get it a little more broken in. One thing I am not concerned about is that the Saddleback ID Wallet comes with a 100 year warranty so I am confident it will wear and last longer than me.

My latest wallet is from a company called Bellroy. It is the Slim Sleeve Wallet (folded bills model) and they also offer a similar model in the flat bills style. I think I originally found this one night searching for wallets here. I saved the link to my Fancy account and forgot about it. A few weeks later we was out at dinner with my friend and his wife and he pulls it out. I fell in love with it then. Having the opportunity to see and feel the quality and overall size make it much easier to decide. I ordered that night.

The package arrived three days later and in a bubble pack envelope. Opening it up was surprised to see a cool cardbpard pacakge with item wrapped in tissue paper. Discarding the tissue revealed a really well made wallet. It was very small and the leather was soft like a broken in baseball mitt. The stiching is very high quality and in my case it is an orange which contrasts with the leather nicely.There are two quick access pockets and I have 2 cards in each. On the left hand side is where I slide the folded bills and receipts. If you fold the bills in half they stick out a little but but it does not interfere with the fold at all. I actually like seeing the edge of the money because it lets me know there is actually some in it.

The right side pocket has room for the extra cards that you do not use all the time, AAA, healthcare cards etc. At the moment I have 4 cards in there as well as 4 business cards as well. The nice thing about this side of the wallet is the little pull tab. There is a piece of fabric with a tab on the top and when you pull on it all the contents of this side of the wallet slide out for easy access or viewing. Its suck a simple idea I am not sure why others have not done it before. The wallet measures 10 X 7.3cm (3.9in x 2.9in) and fits very comfortably in the back pocket as well as the front pocket. I have alsways used the rear pocket but this is so small it can feel like you do not have your wallet with you so you end of checking your back pocket way to much. For the past week I have used it in the front pocket and its perfect. The leather is also breaking in very nicely. Even though it was soft to begin with it has a more wore in feel to it that is very comfortbale in the hand. It comes in 4 colors, black, tan, cocoa and russet. The version above is the cocoa.

Overall all three wallets are similar in size with the Tumi being the largest of the three and the Saddleback the smallest. I really dont believe you can go wrong with any of them, most it will come down to personal preference and actually how many items you actually have to carry with you. If you think the Bellry is too small, the website says you can hold 15+ cards in it. All tolled I have eight hard plastic and 4 business cards in mine and it can easily hold more.

Best Article Title - Unless You Are a Rim Fan I think I laughed for 15 minutes based on Jim title for MG’s article. ‘RIM Offering A Cup Of Shitty, Hot Coffee To Those In Hell’: That is MG

Retail Stores From Shipping Containers I am a fan reusing shipping containers. Most of the examples I have seen are very modern homes or backyard writing offices. This is the first